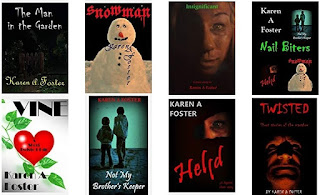 Karen A Foster is a short story author from the UK. I stumbled upon her work in 2017, and I've been a fan for the last three years. HELLD is the thrilling crime-drama which first put Foster on my reading radar. I continued enjoying her ability to use drama and suspense to create some seriously shocking fiction. When I read her anthology, TWISTED, with everything from family issues and spiders to astral projection and murder, Foster became one of my favorite storytellers.

NOT MY BROTHER'S KEEPER (Foster's best work!) proves she is more than just a writer dabbling in horror. Unfortunately, Foster hadn't released anything new in so long, after releasing her first novella, I feared she had given up creating new stories.

Imagine my delight when the author published THE MAN IN THE GARDEN at the very end of 2019. A family moves to a new area, only to have a neighborhood child turn up dead. When another child goes missing, and more murders occur, the family finds itself on a downward spiral into hell.

While it's not nearly as good as NOT MY BROTHER'S KEEPER, and the setup is rather long, the second half is fairly sinister.

In any case, I thought it was time to bring Foster into the Lair...

How did you get into writing? Did you deliberately set out to create horror stories, or does your work just naturally fall into that genre? 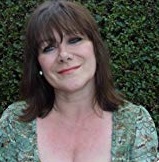 KF: When I was at school, possibly Year 8 or 9, my English Teacher believed I had a talent for writing. She asked me to go away and write her a long story and, in return, promised not to give me any homework. I began to write the story, but, because I was young and wanted to go out and play with my friends, I never did get the story finished. Years later, I thought about what my teacher had said and how she had put her faith in me. She was the inspiration for my first story, ‘Insignificant’. I guess I wanted to prove to myself that I could actually complete a piece of work that, hopefully, others would enjoy reading it.

My work does naturally fall into the horror category. I guess it is because that is the genre which holds my attention. I like stories that take you on a journey into the darker side of life. I don’t think the world is altogether a pleasant place and I think my work reveals this. I made a half hearted attempt at writing a frothy girlie book, but, I have to admit, it bored me silly.

Why do you your plots tend to have a crime-drama theme? Do you get your inspiration from news headlines?

KF: As I mentioned earlier, the world isn’t altogether a pleasant place. There is so much crazy stuff going on behind closed doors and we only get to learn about a fraction of it. The media highlights certain cases, but this is only a very small percentage in relation to the amount of bad stuff that is really happening all around us. When I do read about these atrocities, they fill me with horror. They do, I suppose, inspire me to write about things I find distasteful. My story ‘HELLD’ was most certainly inspired by true events.

Do you have more success with readers in the UK or the US, or do your stories go over well on both sides of the pond?

KF: I would say I have roughly the same amount of success with readers from both the UK and the US. However, most of my reviews come from readers in the UK. Reviews are always gratefully received as these get my work noticed. God knows, I am trying to get noticed.

Do you prefer to write with realism or supernatural elements?

KF: I prefer to write with realism rather than supernatural. However, some of my short stories have elements of the supernatural in them. To be honest, I think some of the terrible things that people are capable of are, to the majority of us, hard to believe. Therefore, they are supernatural.

Which one of your stories was the most difficult to write and why? Which one flowed the easiest?

KF: The story I found most difficult to write was probably ‘Not my Brother’s Keeper’. This is because I wrote it with a deep southern dialect and, as you know, I am British. I do prefer writing for an American audience though and most of my stories are set in the States. ‘Insignificant’ was probably the story which flowed the easiest. This is because I had the story in my head for a very long time. Once I began writing, it just flowed very quickly onto paper.

What can readers expect from you this year? Are you working on anymore projects?

KF: I am currently working on a compilation of short, twisted stories. I also have a couple of longer stories on the go, which I keep going back to. Maybe one day, I can dedicate myself to becoming a fulltime author and flood the book industry with my dark tales.

Thank you for stopping by!

If you haven't already, check out Foster's short stories on Amazon Kindle.