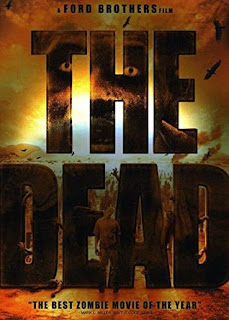 THE DEAD by the Ford Brothers is a very pleasant surprise. I noticed right away the quality of the film is more like a big screen film production than the home-movie quality some indie films seem to have. Also, no stupid camera movements like the shakes, which is refreshing. Not sure about the budget for this particular film, which runs about 90 minutes, but someone definitely spent some money on this project, regardless of the claim that it was “low-budget.” 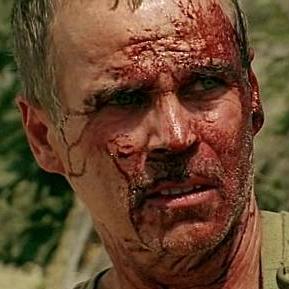 The movie starts with an American soldier, stranded in West Africa after the last evacuation plane crashes in the ocean in the African desert (American actor Rob Freeman as a US military engineer), shooting a zombie, then flashes back to how he ended up in the desert, continuing along until the guy’s storyline reaches the first scene of the movie. I think it's a cool manipulation of the timeline. 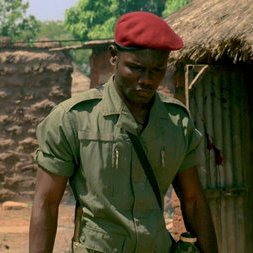 He is joined by an African soldier (African actor Prince David Oseia) who is searching for his son, after his village is overrun. I love the comparison and contrast between these two survivors, which gives the plot some depth. I do think they could have spent a little more time on the military tension between the two, but the idea of them agreeing to work together is believable.

The village outbreak is a great zombie scene, but despite the great action sequences, quite a bit of the film follows the two survivors driving through the wilderness with zombies constantly appearing in the peripheral. There are many intense scenes during the drive, each time they have to stop for repairs, etc. I jumped a few times…catching me off guard with a high suspense factor.

The special effects are excellent, and I'm really glad to see the zombies have the same qualities of the original Romero undead. For that reason alone, if you’re one of those zombie fans who thinks there is no hope for zombie indie films, you should really give this one a chance. There’s never an explanation of the source, but there is a great conversation between two African soldiers that reflects on the outbreak.

I did have some issues with some of the behavior of the survivors (i.e. taking too many risks) which had me yelling at the characters, but that just shows how engrossing the film is. The DVD extras left something to be desired with only one deleted scene & background scenes set to music (absolutely no commentary, which would have been welcomed). The Ford Brothers missed a golden opportunity by not including more special features.

Check out the trailer, and see for yourself.