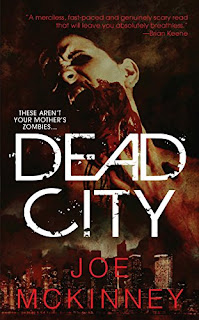 Battered by five cataclysmic hurricanes in three weeks, the Texas Gulf Coast and half of the Lone Star State is reeling from the worst devastation in history. Thousands are dead or dying--but the worst is only beginning. Amid the wreckage, something unimaginable is happening: a deadly virus has broken out, returning the dead to life--with an insatiable hunger for human flesh...

DEAD CITY by Joe McKinney was first released in November 2006. Back then, my son was only a year old, so the scene with Eddie Hudson struggling to release his son from the car seat – while zombies closed in around them – really scared the crap out of me. I had no idea that it was going to be part of a series continued years later. I decided to revisit the series to refresh my memory.

Dead City is told from the POV of police officer Eddie Hudson in San Antonio, TX. At first, he tries to keep the peace when a viral outbreak (linked loosely to flooding and corpses resulting from several recent hurricanes) turns people violent and cannibalistic, but when Eddie realizes he is dealing with zombies, his new mission becomes reuniting with his wife and infant son, April and Andrew. It’s hard to believe that the majority of the story takes place in the span of one night…it’s a nonstop thriller with lots of gore from start to finish.

This is one of my favorite zombie series, and I've continued to reread the series over the years. Even though my son is now a teenager, this particular story still hits me hard as a parent.