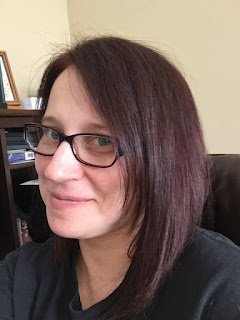 The first interview at the Lair for 2018 brings you Mary Lynne Gibbs. This actress has appeared in several episodes of the series, Star Trek: Osiris, the ongoing series Vampirism Bites and The Last Broadcast, just to name a few of her television and film credits. She is also the author of The Maiden's Courage and the Jericho Cycle series: Jericho Rising and Jericho's Redemption. Last but not least, she is a creative native from Detroit, Michigan who rescues and raises bearded dragons.

In many ways, Gibbs is much like her character Alexandra Gardner from The Maiden's courage: strong-willed and determined, complete with sword (and a violin too). Her young adult fiction has proven to be inspirational to young girls trying to find their own voices. If Gibbs were a book, she'd be a choose-your-own-adventure story. 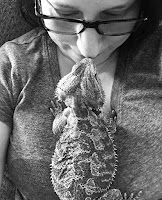 Fortunately, Gibbs had a break in her busy schedule and came to the Lair to answer a few questions for the curious...

Q. Which came first, acting or writing? Do you keep them separate or are they connected in a way?

A. Writing came first. I’ll always call it my first love.  I was in 5th grade when my first poem was published. I moved on to fiction from there. I didn’t start acting until high school, and took a break for a few years before I jumped back in. I believe acting helped me be a better writer, particularly with dialogue. Though I no longer act, I’ll always remember what I’ve learned.

Q. Your stories have strong female characters…is this to draw readers from a certain target audience, or do you simply write what you know?

A. My goal is to write relatable characters, whether they be male or female. Joss Whedon was asked, paraphrased, “Why do you write strong female characters?” His answer was, “Because you keep asking me that question.” I guess I feel the same way. Men are expected to be strong. Women, not so much. Strong is strong, regardless.

Q. You’ve written both dystopian and fantasy stories within young adult fiction…do you prefer one genre over the other?

A. I definitely prefer fantasy. The magical escape is definitely something we need nowadays. 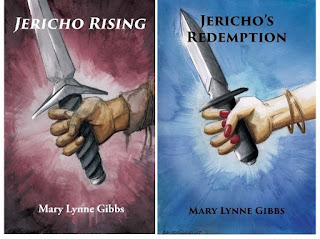 A. Experience tends to dictate that I’d write female characters easier. If I write a male character, I like to get a male point of view to make sure I get him right.

Q. What kind of stories do you enjoy reading when you’re not busy with writing and everything else?

A. I try to read whatever I can get my hands on, but I lean toward the different subgenres of fantasy. Especially urban fantasy.

Q. Are there any authors who inspire you?

A. L J Smith (creator of The Vampire Diaries) really set me on the path to writing YA myself. On the adult side, Diana Rowland, Jaye Wells, Kim Harrison, & Yasmine Galenorn have been nothing short of amazing.

Q. What is your writing process? Do you listen to music? If so, do any of your stories have a specific soundtrack?

A. As far as my writing process, I’m a hybrid between “pantser” & “plotter.” That means I make a loose outline, but wing it the rest of the time.

Every story has its own playlist on my iPod. Whenever I feel stuck, or need extra inspiration, I pop my ear buds in & listen to that specific playlist. I’ve made “soundtracks” for my stories since I was a kid. Back then, I had to use cassette tapes. It’s a LOT easier now!

Q. Do you go to conventions as an author? What kind of interactions do you have with your fans? What kind of feedback do they give you?

A. I go to conventions whenever I can, but I tend to have more interaction with other authors there. My interactions with fans happens on social media. I have one young girl who is especially vocal about my work. We talk quite a bit. She adores my writing, & wants to be a writer. Knowing I inspire her like that thrills me.

Q. What are you working on now and what are your future plans for your writing career?

A. I’m currently querying agents for a manuscript about a high school senior cursed to the role of dragon slayer, & getting ready for a rewrite of an adult novel about a cake decorating vampire hunter. In 2018, I’ll be appearing at Grey Wolfe Scriptorium for a book signing, as well as different vendor events around Kentucky.

Many thanks to Mary Lynne Gibbs for stopping by!

Posted by AstraDaemon at 6:00 AM