What Makes Something Evil? 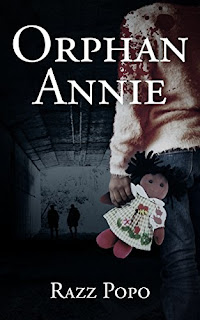 Orphan Annie by Razz Popo has a great mix of suspense and action, but what I enjoyed the most is the way the author blurred the lines of what defines a monster. On one hand you have an organized sex slave ring, on the other hand you have a little girl with demonic tendencies and a creepy talking doll. In the story, a couple of pedophiles find Annie at a playground, in the middle of the night, by herself. They figure she must be from a broken home of some sort, and eventually, after some strange interaction with the child, Annie decides she wants to go back to their "funhouse" and play with them.

I love the way the author reduces the pedophiles to generic nicknames given by Annie, and there is an extra disturbing layer added when Annie's POV takes over the narration. Although it's pretty obvious Mister and Captain made a fatal mistake when they crossed paths with Annie, there is some uncertainty about Annie's blood lust, so it's not as predictable as you might think. Despite how much is revealed, Annie's true nature remains a mystery. I'd love for Popo to write another Annie story...she's one of the most fascinating characters I've ever found in horror.

This is one of those stories that begs a closer look at how we decide what is "evil" or who is a "bad guy." I'd like to think we can all agree that raping children is evil and no one will shed a tear for the fates of Captain, Mister or any of the other sick garbage in the "funhouse." But what about Annie? Of course, I cheered as she turned the place into an epic bloodbath, but one cannot ignore what she is capable of, or her inner struggle between self-control and rage...and that doll. Let's agree for the rest of this discussion, they are all monsters.

Let's also agree that a monster is a creature which carries out horrific acts. If the monster is simply acting out it's nature, is it still evil? A vampire needs blood to survive. If it kills, are all the kills an act of evil, or does killing humans performing unspeakable acts make it okay? If a victim lives a life that we find despicable and cruel, is it murder or justice when they're killed? What does it say about us when we find ourselves cheering on a monster we would normally never want to meet?

The many questions that follow a good story are the very reason I keep coming back to this genre. To a casual observer, horror is about blood and terror, suspense and brutality. To a true horror fan, the genre is ripe with psychological and sociological aspects that explore every aspect of individuals and society...and we love a chilling thrill.