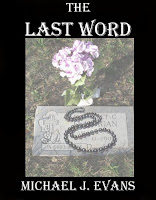 The Last Word by Michael J. Evans is a story about a mother who is so rotten, she torments her daughters, even after death. Ramona, the eldest daughter, refuses to mourn for her mother, which enrages her mother's spirit even more. If I witnessed even one of the events that take place, I would have immediately called in a professional to deal with it. I can't, for the life of me, understand why or how Ramona could be so flippant about everything. While the story is captivating, I couldn't stand the ending.

I've already mentioned in a previous post I have vivid and detailed dreams, including night terrors, some of which I call serial dreams because they can span anywhere from a few nights to weeks, months and years...kind of like having my own television show in my head and I am the central character. Often these serial dreams have evil entities I couldn't get rid of right away, so I had to deal with them every time I slept, until I found their weaknesses.

There was one entity in particular I couldn't get rid of...I tried all kinds of tricks from the many dream books I had researched (this happened before Google existed). Out of desperation, I decided to try the fight-fire-with-a-bigger-fire approach. My dreamself conjured up another entity to fight the first one. (I don't mean conjure as in summon, just visual manifestation within the dream.) It worked, and, unlike most horror stories, my plan did not backfire on me and the conjured entity dissipated.

Having experienced this, I wonder why characters in horror stories don't try something similar when faced with a major supernatural threat. You'd think the characters would be more open to trying new things to help themselves. If I found myself in Ramona's situation, I'd call on help from another departed relative. It's a thought, anyway...